Toss a Coin to Your Witcher: A Complete Guide to The Witcher Franchise

During the holidays of 2019, Netflix’s The Witcher took the world by storm. Despite mixed critical reviews, the series eclipsed Disney’s The Mandalorian as the world’s most in-demand TV show during its first week on Netflix. Even “Toss a Coin to Your Witcher”, the song performed by Jaskier during the second episode, became a hit song overnight.

While many now know about the adventures of Geralt of Rivia from this Netflix series, not many know that Geralt’s story has been around for three decades. Beginning in the short stories and novels of Polish author Andrzej Sapkowski, Geralt has gone onto branch out into other forms of media.

So, if you’re starving for more Witcher while waiting for the second season of the Netflix series, take a look at the entries highlighted in our guide of the franchise. 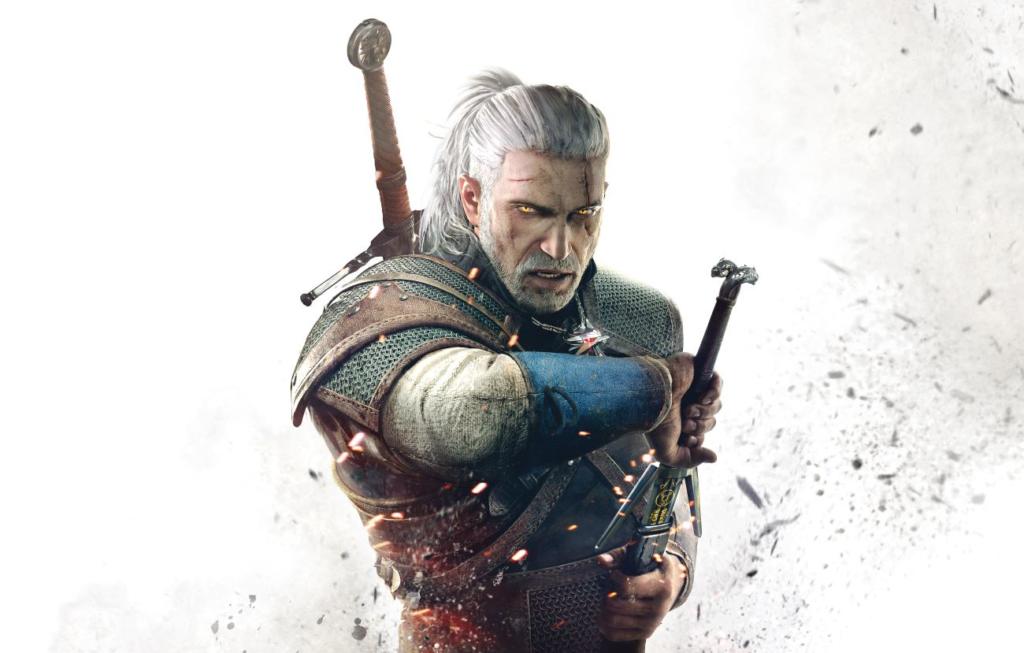 Author Andrzej Sapkowski introduced Geralt, the supernaturally-inclined monster hunter, in a Polish-language fantasy magazine back in the ‘80s. That success eventually led to short story collections and full-scale novels.

In an interesting turn of events, The Last Wish would become a New York Times Bestseller in two separate decades. The first being in 2015 following the release of The Witcher 3: Wild Hunt video game. The second came in 2020 due to the immense popularity of the Netflix series.

Sword of Destiny is another collection of short stories. It features the following six stories:

These stories follow Geralt through many different adventures. These adventures include hunting dragons and sea monsters, falling in love, tracking down a shapeshifter, and meeting series staple Ciri.

Blood of Elves is the first full-length novel in The Witcher saga. As such, it sets up the series’ fundamental story arc.

In it, Geralt reveals his belief that Ciri, the girl from the previous short stories, is the prophesied chosen one that will alter the course of history. In order to elude those that wish to do her harm, Geralt and his contemporaries take to training Ciri in the ways of the Witcher.

In Time of Contempt, Geralt commands Ciri to leave the school of the Witchers and train with the sorceress Yennifer. However, war has broken out across the land, which fractures old allegiances and calls everything into question.

In the face of ever-present danger and instability, Ciri goes missing. This leaves both Geralt and Yennifer to pursue the missing girl.

Baptism of Fire sees an injured Geralt sidelined in his physical search for Ciri and intellectual pursuit for information about the mysterious Black Rider. What he doesn’t know is that Ciri has taken up a secret life with a Robin-Hood style crew called The Rats.

The Tower of the Swallow

Coming into The Tower of the Swallow, Ciri’s exploits as a bandit has made her famous. While that helps Geralt with his search, it also puts a target on Ciri. have made With mercenaries on her trail, Ciri finds herself injured and lost in a swamp.

The Lady of the Lake

After nearly escaping death by jumping through a portal, Ciri is trapped in an Elven world with no means of escape. In order to set the war right, meet up with Geralt, and confront her pursuers, she must break free from this unfamiliar land.

Season of Storms isn’t a sequel per se. More like a midquel.

While published in 2018, Season of Storms chronologically takes place between the short stories and the first novel. This standalone story sees a routine contract go wrong, causing Geralt to lose his signature steel and silver swords.

Sure, Season of Storms isn’t essential to the wider story. However, there’s enough fighting, scheming, and drama to satisfy even the most casual Witcher fans.

In order to move out of video game localization into full-on development, Polish game developer CD Projekt Red acquired the rights to The Witcher franchise. After a long and tumultuous development cycle, The Witcher released as a PC exclusive in October 2007.

The Witcher places you right in the boots of Geralt of Rivia. Unfortunately, Geralt has no recollection of his past. While recovering at Kaer Morhen, Geralt is thrust back into his life as a Witcher when a mysterious foe attacks the keep.

Built off the same engine as BioWare classics like Knights of the Old Republic and Jade Empire, The Witcher plays like many computer role-playing games of the early 2000s. Mouse clicks control Geralt’s attacks, while keyboard presses control his movement. Outside of combat, Geralt could make choices that would cause the game’s story to deviate.

Praised for its deep story, intriguing characters, and well-crafted world, The Witcher was well-received among critics. In fact, it earned an aggregate score of 81 on Metacritic and was named GameSpy’s PC RPG of the Year for 2007.

The Witcher 2: Assassins of Kings

Being a PC exclusive in 2007 only got games a certain amount of exposure. Despite not being as powerful, consoles were the center of attention. As such, CD Projekt Red looked to bring the franchise to a wider audience with the second Witcher.

After the events of the first game, Geralt is framed for the assassination of King Foltest. In order to prove his innocence, Geralt teams with Vernon Roche and Triss Merigold to hunt down the kingslayer.

From story to combat, Assassins of Kings expands on its predecessor in every way. The story features four different beginnings, 16 unique endings, and two branching critical paths all based on the choices Geralt makes throughout. The combat is far more refined. As such, it plays like a traditional action game with the backing of deep RPG mechanics. Assassins of Kings’ plethora of improvements led to even greater critical acclaim.

While the ratings were high and the awards rolling in, Assassins of Kings’ greatest achievement would be opening the franchise to a new audience. Before Witcher 3’s release in 2015, the first two Witcher games would go on to sell eight million copies.

As the conclusion of CD Projekt Red’s trilogy, many people had the highest of hopes for The Witcher 3: Wild Hunt. Fortunately, it delivered in every way possible.

First of all, the story sees an amnesia-free Geralt reuniting with his long-lost love Yennifer. The two team up to track down Ciri before the Wild Hunt, spectral warriors from another dimension, find to her.

While the combat and RPG progression get plenty of refinement, the open world of the Continent is the star of the show. It’s easy to spend hours in this dense open-world engaging with side quests, playing the Gwent minigame, or even talking to the unique people populating the world. The content of Wild Hunt is so rich that it’s rewarding no matter what you do. Plus, the Heart of Stone and Blood and Wine expansions add even more.

Considering the rich open-world, excellent story, and refined combat, it’s no surprise that The Witcher 3: Wild Hunt and its expansions received glowing praise from critics and gamers alike. On top of all that, Wild Hunt turned the franchise into an RPG powerhouse sales-wise. To date, the game has sold 28 million copies worldwide.

Way before The Witcher became a household name thanks to Netflix, there was The Hexer. This Polish TV series was loosely based on the story from the books.

Released in 2002, The Hexer ran for one season made up of 13 episodes. The story follows Geralt’s transformation from boy to full-grown Witcher.

While some enjoyed it, that wasn’t enough as evidenced by the show’s limited run. Unfortunately, the universe’s creator didn’t have anything nice to say about it. In a 2003 interview, Sapkowski described The Hexer as “indecent”.

It wasn’t long before the Game of Thrones-sized hole in our TV schedule was filled with another fantasy epic.

Releasing December 20, 2019, Netflix spared no expense on The Witcher. They tapped Superman himself Henry Cavill to play Geralt of Rivia. Plus, they even renewed the show for a second season before the first episode aired.

When it comes to story, the eight-episode first season owes much of its plot to short story collections The Last Wish and Sword of Destiny.

Though it’s Rotten Tomato score isn’t great, fans made it one of the biggest original series to hit a streaming service ever. With the second season on the way, the sky is the limit.